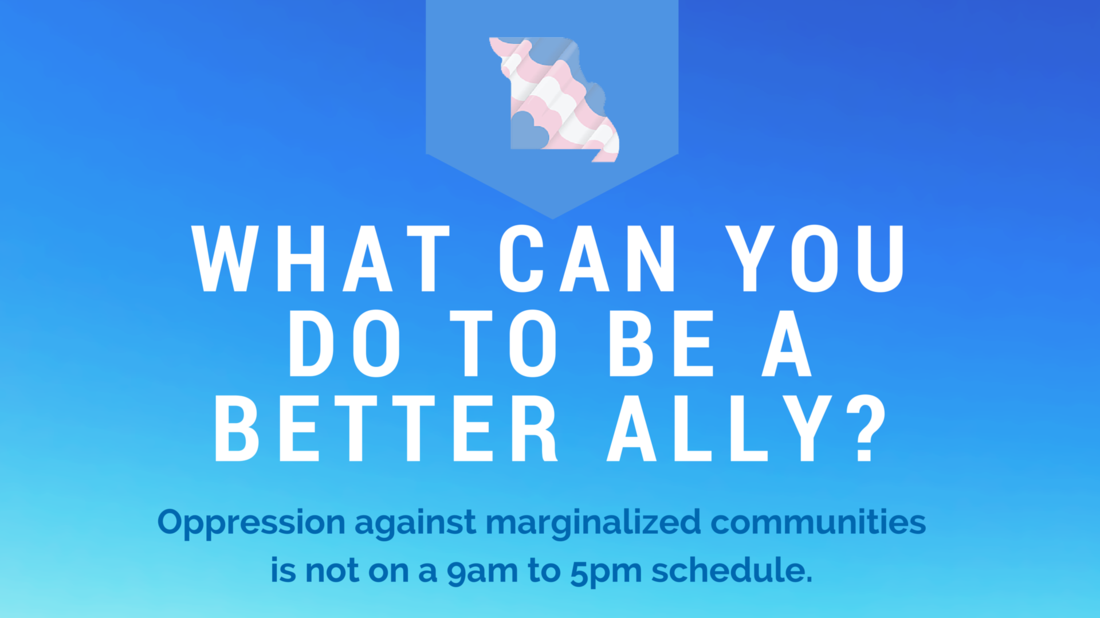 *Please note, not all people will identify with one or more of these definitions. This is meant to be a beginner guide to terminology. For a more in-depth look at these identities and definitions, check out the blog section throughout the year. 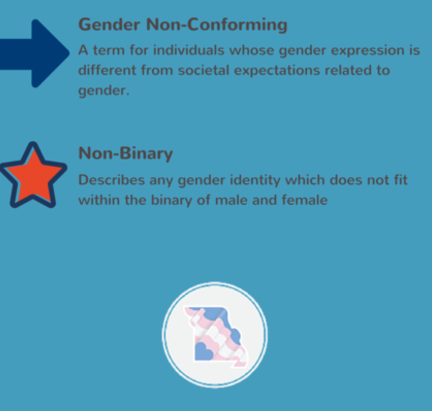 Five Ways YOU Can Be A Better Ally

Understanding and accepting “privilege” can be a daunting task. Privilege is officially defined as, “A special right, advantage, or immunity granted or available only to a particular person or group of people.” These identifying characteristics include your race, ethnicity, sex, gender identity, sexual orientation, ability status, etc. It is something that you are born with. Once you have recognized this privilege, however, it can be used as a powerful tool to help make a positive difference for underprivileged communities. You can use your privilege by speaking up for marginalized individuals, educating others that have also been born with privilege to help them understand better.

​Here are five ways that the LGB community, the cisgender community (individuals whose gender identity matches their sex assigned at birth), as well as non-LGB-identified individuals, can continue to be allies to the trans community.

1. Learn your terminology. The trans* community incorporates a wide number of gender identities, gender expressions, and different life experiences. Identifying as trans* means something different for each individual person. The idea of gender is a wide and diverse spectrum. Refer to the infograph below to become more educated on differentterminology used within the trans* community. While not all transgender people will define themselves in this way, a basic definition of someone who is transgender is
people whose gender identity (the sense of gender that every person feels inside) or gender expression is different from the sex that was assigned to them at birth. At some point in their lives, transgender people decide they must live their lives as the gender they have always known themselves to be, and often transition to living as that gender.

2. Address people by their correct pronouns. Address people by their correct pronouns. A good lesson and overall habit to get used to, no matter who you speak with, is asking people what their gender pronoun is. You should not assume just by looking at a person how they identify within the gender spectrum. We typically hear pronouns like she/her/hers and he/him/his, but like the gender spectrum, every person has a different way that they identify and should be addressed. They/Them/Theirs is becoming increasingly more mainstream. You do not assume someone’s name, so do not assume their pronoun.

3. Know what to ask and what NOT to ask. There are definitely questions that you can ask a trans* person. This includes:

⇒But you definitely should not ask questions about:

Again, every individual is unique in their own way. And what that individual decides to do or share with you is their business alone, not anyone else's. If a trans*-identified person wants to confide in you and tell you this information, it is up to you as an ally to be supportive, encouraging, and to give them a space of comfort.

4. Do not misgender. When you call an individual by the wrong name, the wrong pronoun, or criticize the way they dress/talk/act, you are attempting to erase that person’s identity. Misgendering is harmful to the trans* community. When you misgender, you disrespect who that individual is and what that individual’s experiences have been. So ask them how they want to be addressed and what their pronoun is to make sure you do not misgender somebody one-on-one, in a public space, wherever. The most accepted way to ask someone their gender pronoun is either one-on-one or during full introductions in a group setting, where everyone provides both their name and gender pronoun.

5. Challenge transphobia. Transphobia happens every single day. In 2015 alone, the lives of more than 20 trans* women have been lost across the United States because of transphobia. You can challenge transphobia by volunteering with a trans* support group or advocacy organization or by challenging someone’s comments that they made on Facebook. Most recently, the #IllGoWithYou campaign, created by trans* allies, focuses on cisgender people going to the restroom with trans* people who are afraid or concerned about their safety when using a public restroom. Standing alongside and speaking up for the transgender community goes a long way in standing up against transphobia.