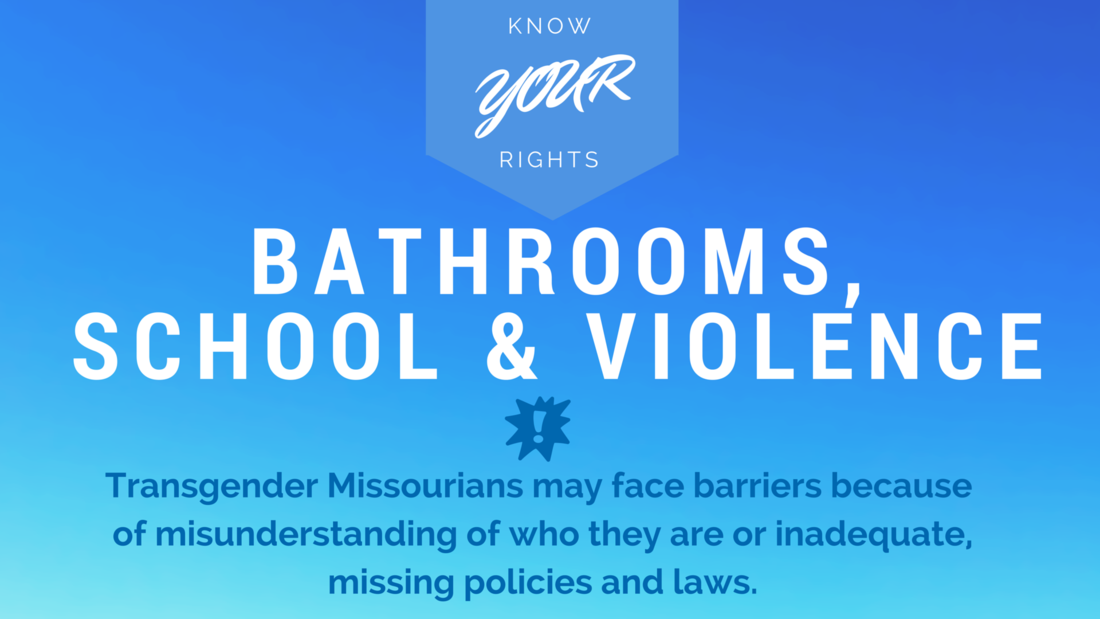 Having safe and secure access to a restroom is part of each person’s daily schedule. But each day, transgender individuals face several barriers when deciding which restrooms to use, with many fearing for their own physical and emotional safety. You have the right to use the restroom that corresponds with your own gender identity without fear of discrimination. Learn more about these guidelines and resources below.

Violence Against the Transgender Community

The transgender community faces alarming rates of sexual and physical violence because of transphobia. As reported, one in four trans* people has been subject to violence, and the numbers are even higher for trans women and trans women of color. In Missouri, the definition of gender identity is included within the definition of sexual orientation within the Missouri Hate Crimes Statute, providing protections for transgender Missourians, yet violence persists, due to lack of education and understanding. You have the right to be protected from violence and discrimination. Learn more from the resources below.
​

As a student, you have the right to attend school, take part in class, and be involved in extracurricular activities without fear of discrimination from your peers, faculty, or staff members. You also have the right to be called your correct name and gender pronouns by teachers and faculty.

​In May of 2016, the Obama Administration sent a letter to all public schools in the United States notifying them that they must allow transgender students to use the bathroom according to their gender identity. This is a huge victory for the trans* community. You can read the letter here.

​This Title IX guidance was rescinded in February of 2017 by the Trump Administration. While this sends a dangerous message and reinforces an idea that transgender people are undeserving of legal protection, it does not change the fact that schools are still liable if they discriminate against transgender students. Here is an FAQ guide from the National Transgender Center for Equality on knowing your rights at school. If you or your child have been discriminated against at school please file a report with the ACLU and/or Lambda Legal immediately.

Several K-12 schools are looking to further improve their curriculum and policies through including lessons of gender identity within their health curriculum and allowing students to use restrooms that align with their gender identity. Most colleges and universities in Missouri have already taken these steps. Learn more about changes in school policy and curriculum below.
​